The local police chief has confirmed that the main accused in the case, Gaurav Sharma, runs his social media pages with the name 'Gaurav Songra'. 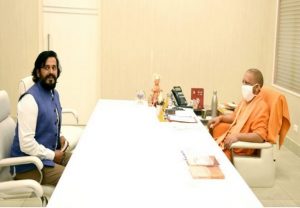 The Chief Minister expressed happiness about the pace of film production in the state. Kishan said the Bhojpuri industry should also make such films that will bring national awards. In the viral video on social media, a man called Chacha attacked others in a heroic manner. It reminded netizens of a WWE match. Many netizens also commented on Chacha's hairstyle. Prime Minister Narendra Modi on Thursday released a postage stamp dedicated to mark the beginning of centenary celebrations of the Chauri Chaura incident in Uttar Pradesh, via video conferencing. Addressing the people at the event in Chauri-Chaura, Prime Minister Modi said, "Incident of Chauri Chaura was not limited to a police station being set on fire. The message of the incident was huge. Varasat campaign began on December 15 and will continue till February 15, 2021 and it aims to end to the long pending land disputes specially in the rural areas and will also put a check on land mafias who target disputed land mostly in rural areas. UP: BC Sakhi program moves at fast pace, 56,532 rural women to be appointed by April Good News: Two-day jaggery festival to be organised in Lucknow for 1st time

Gur festival will showcase the benefits of jaggery and its related products. Yogi govt is going all out to publicise the Mahotsav to ensure that festival witnesses maximum participation and quality and range of jiggery is explored to full extent. As foreign firms expressed intent to invest in UP in a big way, Yogi govt has decided to bring out 'UP Electronic Manufacturing Policy – 2020' in August 2020, which is aimed at developing the Electronics sector in all parts of the state.