Tandon, 85 passed away at 5:35 am on Tuesday after a prolonged illness. 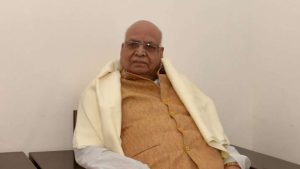 Taking to Twitter, Shah wrote, “I am deeply saddened by the demise of Shri Lalji Tandon, senior BJP leader and Governor of Madhya Pradesh. Tandon’s entire life was devoted to public service, he played a very important role in the expansion of the organization in Uttar Pradesh.”

“As a public servant, Shri Lalji Tandon Ji has left a deep impression on Indian politics. His death is an irreparable loss for the country and the BJP. I pray to God for the peace of the departed soul and express my condolences to his family,” he added.

Speaking to ANI Yogi said, “Grieved to hear the news of the demise of Madhya Pradesh Governor Shri Lalji Tandon. With his death, the country has lost a popular mass leader, a qualified administrator and a great social worker. Whatever he did for the development of Uttar Pradesh is inspiring. I pray to God for peace of the departed soul. My condolences to the bereaved family.”

“Grieved to hear the news of Madhya Pradesh Governor’s demise. With his death, the country has lost a popular leader, a qualified administrator and a powerful social worker. He was the soul of Lucknow. I pray to God for the peace of the departed soul. My condolences to the bereaved family,” CM Yogi tweeted earlier today.

“Chief Minister Chouhan Shivraj has expressed deep sorrow at the death of Madhya Pradesh Governor Lal Ji Tandon while paying tribute. He said that as governor he always inspired us to follow the path,” CMO Madhya Pradesh tweeted.

“In his condolence message, the Chief Minister said that his love for the nation and contribution to progress will be remembered forever. The soul is ajar-immortal. He is not among us today but he will always live in our memories through his thoughts,” CMO added.

In the meeting of the Council of Ministers, today tributes will be paid to Lalji Tandon. Chief Minister Shivraj Singh Chauhan will attend the funeral of Lalji Tandon in Lucknow, MP CMO informed.

His last rites will be performed at Gulala Ghat in Lucknow at 4:30 pm today. Tandon was admitted to the hospital after complaining of breathing problems, difficulty in urination and fever. He was undergoing treatment at the hospital since June 11. (ANI)