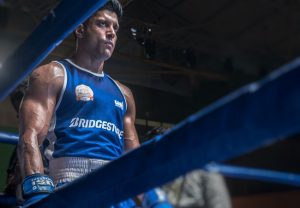 The film which narrates the story of a boxer is produced by Ritesh Sidhwani, Farhan Akhtar and Rakeysh Omprakash Mehra who is also directing the film.

Other than B-town celebrities and political leaders scores of locals including environmental activists have been opposing the cutting of trees for the construction of the car shed of the metro station. They are demanding the relocation of the bus depot, which is a part of the Metro III project.

The director-actor duo had earlier collaborated for the biopic based on Indian athlete Milkha Singh, 'Bhaag Milkha Bhaag,' which won Farhan a number of awards for his portrayal of the athlete.

Amitabh’s professionalism is worth compiling in a book: Priyanka Chopra

Farhan Akhtar and Rohit Saraf, who were also present here to promote their upcoming flick also expressed their happiness over Amitabh being selected for the award.

Farhan Akhtar and Priyanka Chopra who are gearing up for the release of their next outing 'The Sky Is Pink' expressed happiness over 'Gully Boy's' Oscar entry.

Priyanka Chopra stuns in black saree, pets a stray dog during ‘The Sky Is Pink’ promotion

Priyanka Chopra is back home in Mumbai and is currently on a promotion spree for her upcoming film 'The Sky Is Pink'. .The film also stars Farhan Akhtar, Zaira Wasim and Rohit Saraf in key roles is slated for its release on 11th October.

Priyanka Chopra reveals her plans of having kids with Nick Jonas

On being asked if she and the 'Jonas Brothers' singer plan to have kids in the future, she replied with a huge smile on her face, "Hopefully, if god blesses us with them."