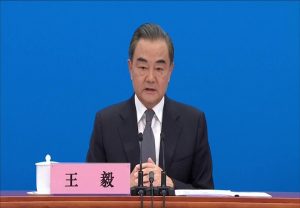 China ready to cooperate to find COVID-19 origin but this process shouldn’t be politicised: Wang Yi

"The disaster wrecks havoc watching from an apparently safe distance and sitting idle will eventually backfire. Pointing fingers at others will only damage one's own reputation," he said.

"I am looking forward to attending the next meeting in January. I am sending our DG to attend the event," Bangladesh Foreign Minister AK Abdul Momen said.

Pakistan has been insisting on levying a fee of USD 20 on all pilgrims. However, the Indian side has urged the Islamic nation to not charge the proposed fee.

The Chennai informal summit will provide an opportunity to the two leaders to continue their discussions on overarching issues of bilateral, regional and global importance and to exchange views on deepening India-China Closer Development Partnership, the Ministry of External Affairs said in a statement.

Pakistan: Will not allow Kovind’s aircraft to fly over airspace, says FM

Though Pakistan has been threatening to completely close its airspace for India since the latter announced its decision to abrogate Article 370, no official notification had come in this regard.

The failure of the movement has left Pakistan red-faced, as it continues its pursuit of raking up the Kashmir issue in international forums.

PM Modi arrives in Russia on a three-day visit

During the three-day visit, the Prime Minister is scheduled to hold talks with Russian President Vladimir Putin in which the two leaders will discuss bilateral, regional, and international issues of mutual interest.

Despite that. Qureshi claimed that Kashmiri people have been disconnected from the outer world by Indian forces as there is still a blockage of communication networks in the valley.