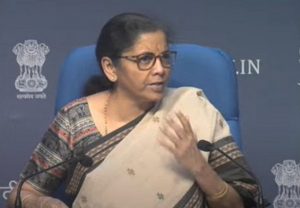 The Ministry Of Corporate Affairs Secretary Injeti Srinivas was also present at the meeting.

Centre taking every step to import onions, restore their supply to market: Sitharaman

We have a Group of Ministers, which is reviewing the situation regularly and deciding on how to further take up the import-related issues regarding onions. The onion crop was damaged due to heavy rains and flood," said Sitharaman

Sitharaman said notifications giving effect to the recommendations of the Council are proposed to be issued on October 1.

In its mouthpiece Saamana, the BJP ally on Friday said while Prime Minister Narendra Modi and Home Minister Amit Shah were doing a "great job", their ministers were making their task tougher by "mocking the deteriorating state of economy and employment".

"Whenever Rahul Gandhi raises things like 'chor,chori,' one thing comes to my mind. He tried his best 'chor, chor, chori' but the public has given him a befitting reply," Sitharaman told newsmen.

Jaitley said massive infrastructure creation also has the ability to generate employment and attract investment. So does a boost to the construction and real estate sector.

A day after tax revision, fuel prices hiked by over Rs 2

Sitharaman, who presented the first budget of the new government, had said crude prices have softened from their highs, paving way for her to review excise duty and cess on petrol and diesel.

Unless we give substantial incentive for renewable energy, particularly when it comes to the question of mobility...emissions from vehicles that use fossil fuel is main reason for suspended particles in air...So we wanted to make sure that if we have made a good commitment for improving air quality conditions we have to support electric vehicles

Presenting the first full-fledged Union Budget of Narendra Modi 2.0 government in Parliament, Sitharaman said from no single Indian institute in top 200 universities ranking until five years ago, the country has three institutions in the top 200 global institutions bracket.