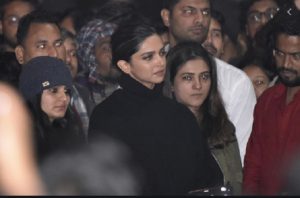 New Delhi: Days after pictures of Bollywood biggies with Pak agents/sympathizers surfaced, creating flutter in the industry, a fresh controversy... The police have so far recorded statements of 38 people, including those of Rajput's family and his cook. Rajput, 34, was found hanging at his apartment in suburban Bandra on June 14. The police have so far recorded statements of 38 people in connection with the case. Celebrity couple Riteish Deshmukh and Genelia Deshmukh also tuned in to catch the film as soon as it premiered on the online video streaming platform and shared the pictures from the movie-watching experience. According to the police, statements of 39 people, including film critic Rajeev Masand, director-producer Sanjay Leela Bhansali, and filmmaker Aditya Chopra have been recorded in the investigation so far. "A suicide note was recovered from the scene, in which the girl has stated that she was taking the extreme step as she was upset about the death of actor Sushant Singh Rajput," the SHO said. Shiv Sena MP Rahul Shewale has alleged that some Bollywood actors have performed in shows organised Siddiqui, who "is connected with ISI" and has sought an inquiry. The 77-year-old actor is in Mumbai's Nanavati Hospital with COVID-19 - he was admitted on July 11 after he tested positive for the coronavirus.

Some Bollywood celebs have links with ISI and Pak Army, says Jay Panda

Panda's allegations have come at a time when Bollywood is reeling from various scandals, ranging from nepotism to harassment, triggered by the demise of 'Kai Po Che' actor Sushant Singh Rajput. #20in2020: Priyanka Chopra invites fans to join her in celebrating 20 years in industry

"Just want to take a second to thank every single person who took the time to wish me a happy birthday. Your thoughtfulness was so heartwarming and truly made the day that much more special. Thank you, thank you! Lots of love to you all," she tweeted.