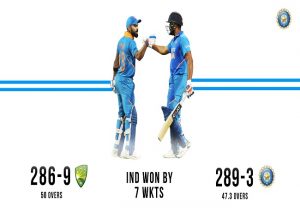 Brisbane Test: Australia bowls out Pakistan for 240 on day one

CWC’19 Semi-final: Players to watch out in England-Australia clash

Starc entered the Lord's Cricket Ground with 15 wickets under his belt. The 29-year-old scalped three England wickets - Joe Root, Eoin Morgan, Ben Stokes and Adil Rashid - to take his tally to 19 wickets in the tournament so far.

The hosts need to win their remaining two matches against India and New Zealand to enter the knock-out stage. If England manage to win one match from their two fixtures, the fortunes of the team will depend on other results in the tournament.

CWC’19: Key players to watch out in England-Australia clash

Arch-rivals England and Australia will lock horns in the ongoing ICC Men's Cricket World Cup at Lord's on Tuesday. Host England lost their last match to low-ranked Sri Lanka and are now placed in the fourth position with eight points. They have won four games and lost two. England have never lifted the World Cup.

CWC’19: Key players to watch out in Australia-Bangladesh clash

Bangladesh will try to keep up their winning momentum whereas Australia would strive to seal their semi-final berth when the two sides clash with each other at Trent Bridge on June 20 in the ongoing ICC Men's Cricket World Cup.