Several mountainous roads in Himachal Pradesh were closed for vehicles following a fresh bout of snowfall in the state while light rainfall was reported from some areas on Tuesday, officials said. Sub-zero temperatures were recorded at major tourist destinations of Kufri, Manali and Dalhousie, the Shimla meteorological (MeT) department said. 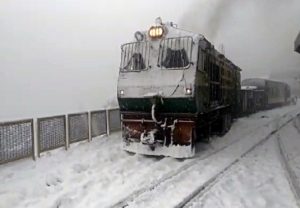 Many tourist hotspots of Himachal including Shimla, Manali, Kufri and Dalhousie received fresh snowfall. Heavy snowfall has brought much cheer among the tourists. Here are some images of Shimla, the famous hill station with apparently most footsteps. Popular tourist destinations Shimla and Manali on Tuesday received more snowfall, while the lower hills across Himachal Pradesh were lashed by rain, bringing the temperature down by several notches. Hoteliers have cheered up with the snowfall in the hope that tourists will come in large numbers in the coming days. Tourist spots near Shimla, such as honeymooners' paradise Kufri, Fagu and Narkanda experienced plentiful snowfall, making the hill stations even more picturesque.

New Delhi: Cold wave conditions further intensified following rain and snowfall in many parts of the state for the last...

Sara Ali Khan and Kartik Aaryan were spotted taking a stroll in Shimla with their faces partially covered. The two are in Himachal Pradesh for the shooting of Imtiaz Ali's next.

New Delhi: A fire broke out in the engine of famous Himalayan Queen tourist train in Himachal Pradesh on Tuesday....

New Delhi: Himachal Pradesh on Saturday witnessed a sunny but chilly day with temperature in many areas staying below freezing point,...