Uber’s Mumbai employees will continue to work from home until December, the person said. It is not clear if the employees will be moved to another office in Mumbai next year. 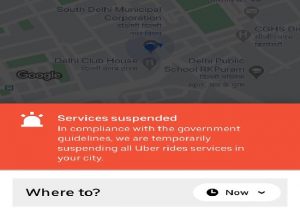 Eighty cities including Delhi, Mumbai, Kolkata, Chennai and Bengaluru are going into complete lockdown this month as India fights to contain the spread of coronavirus.

Uber to provide financial support to drivers diagnosed with COVID-19

Uber has also promised to protect the current Uber Pro status for all drivers for this qualifying period. Meanwhile, Uber is also working to provide drivers with cleaning supplies to keep their cars clean. The police recorded the statements of the two but did not find anything suspicious and therefore let them go. Sarkar, a resident of Rajasthan's Jaipur, was visiting a friend in Kurla area. Police questioned him for almost two hours.

The cab driver told the passenger that he would be taking a detour for withdrawing money from an ATM. Instead, he took Sarkar to Santacruz Police Station. Hyundai also unveiled a four-seater aircraft concept called SA-1 which is capable of reaching top speeds of up to 180 miles per hour and fly at an altitude of 1,000 to 2,000 feet above the ground, TechCrunch notes.

The company in the past too has been denied permission. The Tfl was first declined to renew its licence in 2017 citing several concerns including how Uber responded to serious crimes.

Economy is sound as 3 movies earned over Rs 120 crore in a day, says Ravi Shankar Prasad

Making a veiled reference to P Chidambaram, who served as the then Home Minister when the 26/11 attacks took place, Prasad said: "In 2008, there was an attack in Mumbai and both the Centre and the state governments at that time were so helpless. The Home Minister at that time said 'Sorry Mumbai' and he is in jail now."