On New Year's eve, the railways had announced a fare hike across its network, excluding suburban trains, effective from January 1, 2020, according to an order issued on December 29, 2020. The fake report by newspaper comes in wake of several former sportspersons including Padma Shri and Arjuna awardees extending their support to the agitating farmers by offering to return their awards. Fact Check: Did Chinese troops use ‘microwave weapons’ in Ladakh? Here is what Indian Army said….

China is seeding a 'fake news' story about using microwave weapons at the LAC, referring to a Beijing-based professor's claims that Chinese forces 'turned mountain tops into a microwave oven' during a recent clash with Indian forces. A viral video doing rounds on social media claims that the Central government will transfer Rs 2,500 into accounts of daughters/girl students every month. The viral claim, made in YouTube video is fake and misleading. New Delhi: Amid the tense stand-off at Line of Actual Control (LAC), Chinese troops have further advanced into Indian territory,... 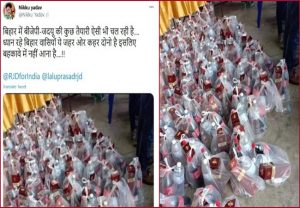 As Bihar prepares for polls, a viral image of alcohol bottles is circulating on social media, with claims that it will be distributed before elections to woo voters. It assumes significance as there remains total prohibition on alcohol in the state since 2016.